Greece's return to economic growth has generated aplenty of investor interest in the country which is further enhanced by government initiatives to foster foreign investments in Greece. Please join Η.Ε. Minister of Development & Investments Mr. Adonis Georgiadis, in a conversation with Jay Collins, Vice Chairman of Banking, Capital Markets and Advisory at Citi, around the future of Greece as a leading destination for international investment, as well as the commencement of the development of "THE ELLINIKON" which represents one of the largest urban regeneration projects globally and is expected to reposition Greece and Athens as a major, world-class destination. 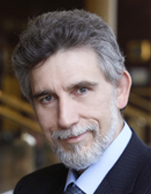 Since 1996 Mr. Nicolas Bornozis is the founder, President and CEO of Capital Link, Inc., an international investor relations and financial advisory group. It assists listed companies and capital markets related organizations to develop and maintain access to European and North American investors. Capital Link has offices in New York, London and Athens and is a leader in investor relations for listed shipping companies, U.S. Closed-End Funds and ETFs and international companies accessing the U.S. and European markets.

He also established and managed, Alexander Capital, L.P, a US broker-dealer firm, which developed brokerage and investment banking business in North America with the Greek, Egyptian and Russian markets. Sold the company at the end of 2003 to a group of US investors representing Russian interests. Between 1998 and 2002, he also established and managed Alexander Asset Management, Inc. which handled portfolios invested in the Greek and European equity markets.

Prior to Capital Link (1988-1995), he served as President and CEO of CCF International Finance Corp. (CCF IFC), the US broker/dealer subsidiary of Credit Commercial de France, now part of HSBC, and worked at the International Department of Bankers Trust Company in New York (1982-1984) and then at the Commercial Banking operation of CCF in New York (1985-1987) focusing on the financing of Wall Street firms and shipping.

He holds an MBA from Harvard Business School (1982) and a Law Degree from the University of Athens (1979), in Greece with specialization in commercial and corporate law and is a graduate of Athens College in Greece.

For a period of twelve years he was a Visiting Lecturer on International Banking and Finance at the City University Business School (Department for Shipping Trade and Finance) in London, United Kingdom. Also, he served as Chairman of the Investment Management Committee of the Harvard Business School Club in New York. 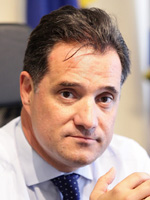 Adonis Georgiadis was born on November 6th, 1972, in Athens.

He graduated from the Faculty of History & Archaeology of the School of Philosophy of the National & Kapodistrian University of Athens.

In 1993, he took over the management of publications 'GEORGIADIS-LIBRARY OF GREEK'. In 1994, he founded the Liberal Studies Center "GREEK EDUCATION".

Elected MP in Athens B region in the elections of 2007 and 2009 with the LAOS political party.

In February 2012, he joined the Nea Demokratia political party, having resigned from the parliamentary office. Elected with Nea Demokratia in Athens B in the national elections of 2012 and 2015.

On January 18th, 2016, he was appointed one of the two Vice-Presidents of the Nea Demokratia by decision of Kyriakos Mitsotakis, the President of Nea Demokratia.

On July 8th, Adonis Georgiadis was appointed as Minister of Develpopment and Investments after the 2019 greek elections.

He is married to Eugenia Manolidou and they have two children, Perseus and Alcaeus.

On a one-on-one discussion with 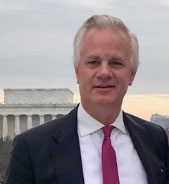 Jay Collins, Vice Chairman of Banking, Capital Markets and Advisory, is Citi’s senior banker for governments. He has covered clients around the world in every sector and run transactions across the full product spectrum of Citi. Jay has advised governments and corporations on large scale financings and M&A on every continent.

Over the course of his career, Jay has advised 54 different governments on privatizations, liability management and funding solutions, infrastructure finance, Market’s solutions, structured products and derivatives, and electronic banking services, including a wide range of digital solutions. He has been a Senior Credit Officer of the Firm since 2006.

Jay was Global Head of Citi’s Public Sector Group from 2005-2011 where he had day to day management responsibility for Citi’s business with central banks, finance ministries, pensions, sovereign wealth funds, cities and other government, quasi-government and supranational entities. From 2006-2007, Jay was also Global Head of Infrastructure for Citi.

From 2001- 2005, Jay was Head of Central and Eastern Europe, Middle East and Africa (CEEMEA) for Global Banking at Citi. His London based responsibilities included managing the coverage effort for Investment Banking, Emerging Markets Corporate Banking, and Global Relationship Banking in the region. He also had responsibility for Islamic Finance.

Prior to his CEEMEA position, Jay was Deputy Head and the senior foreigner in Nikko Citigroup's Investment Banking Division in Tokyo, Japan. He has also served as Chief Operating Officer for the Latin America Region. In addition to his deal responsibilities, Jay managed Salomon Brother's joint ventures in Brazil, Chile and Argentina.

The webinar will consist of a 45-minute discussion between H.E. Minister of Development & Investments Mr. Adonis Georgiadis and Mr. Jay Collins, Vice Chairman of Banking, Capital Markets and Advisory at Citi.


The webinar will be archived and available for replay on demand upon registration.

This webinar will be available for replay after the live broadcast.

Capital Link has initiated a series of webinars at regular intervals aimed to raise the profile of Greece as a business, investment as well as a cultural destination to the global community. The webinars feature experts who share their authoritative insight on a broad range of critical topics relevant to the economy, the business and investment as well as culture opportunities in Greece and the broader region. Capital Link is known for hosting top quality physical and digital conferences around the world as well as a series of webinars and podcasts on a variety of industry, finance and investment topics. Capital Link’s events combine top informational and education content with rich marketing and networking opportunities.