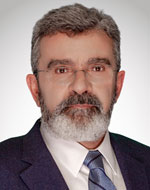 Panos joined Ernst & Young in 1988 and is based in the Athens office. Panos is a Qualified Accountant in Greece and Romana.